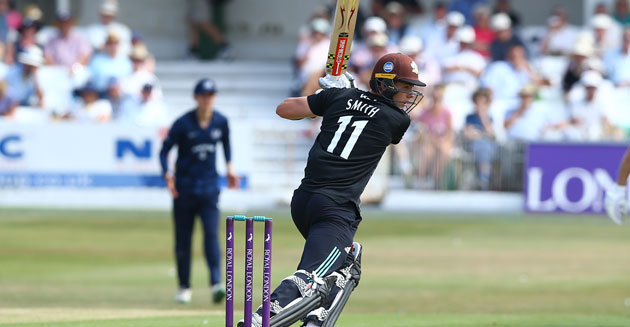 By Surrey CricketAugust 5, 2021No Comments

Jamie Smith realised the ambitions of many a promising young cricketer on Thursday when he captained Surrey for the very first time in the Royal London Cup encounter with Somerset.

Just over three years on from his senior debut at county level, the 21-year-old wicket keeper batter had the honour of leading the Club he’s always called home at The Kia Oval with Hashim Amla forced to sit the game out through a groin injury.

Born in Epsom in 2000, the former Whitgift School student first represented a Surrey age group side at the age of 10 and enjoyed an almost idyllic rise through the ranks.

It was still 8 days before his 18th birthday when he made his senior debut for the Club and he entered on just about the biggest stage possible. A London Derby at Lord’s is a far cry from the club grounds used for much of the junior cricket and above all that, receiving your first cap from the one and only Kumar Sangakkara is bound to have an effect to even the most composed young man. Luckily for Smith, composure has been a key component of his fledgling career already.

Following that full house north of the river, Smith pulled out a stunning catch from backward point in front a capacity Kia Oval crowd just 8 days later. A professional contract followed upon completion of his studies later that year and a first-class debut came in Dubai in March 2019, when Surrey played the Champion County fixture against the MCC at the ICC Academy.

And what a showing it was. A fifth wicket partnership of 266 with fellow Academy graduate Ollie Pope through a sandstorm, including 127 for Smith, made the game safe for Surrey before the weather put paid to a victory.

338 first-class runs followed in the domestic 2019 season before the 2020 year was heavily truncated for reasons we’re all well aware of. 2021 has been the real breakthrough year for Smith.

With the top five. all international cricketers, largely settled for the early season there was a race on to fill the number six spot between the remaining batters in the squad. Smith got the nod in the first LV= County Championship fixture of the season and held the shirt throughout, making 388 runs in 14 innings.

The standout moment in that campaign was another monster partnership with Pope, in which Smith made 123 runs from 183 balls with 18 boundaries. Again demonstrating that composure, Smith brought up that century with a delightful inside out drive over long off for six.

An almost ever present in our Vitality Blast campaign too, Smith has been the steady reliable player in a year which has seen the Surrey side change regularly due to international and Hundred commitments. At just 21, there’s still so much more to come from Jamie Smith but whatever happens in his career, he can always say he captained Surrey.