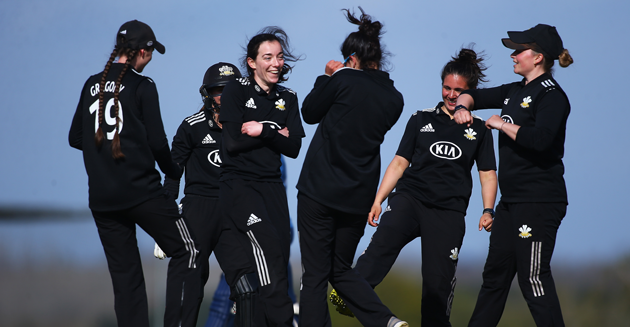 By Emily ClarkNovember 26, 2021No Comments

Surrey Women will kick off their 2022 campaign with a T20 double header against Sussex on Monday April 18th.

Seeking to go one better than the second place they managed in the South East group in 2020, Surrey have been placed in Group 6 alongside strong competition in Kent, Sussex and Hampshire.

After hosting Sussex, Surrey will travel to Kent for a double header on Sunday April 24th before hosting Hampshire for two more T20s on Bank Holiday Monday, May 2nd.

The two semi finals and the final will then be played on Sunday May 8th. All venues are still to be confirmed and will be announced closer to the time of the matches. Entrance is free of charge for all games, with no tickets required.

In a slightly restructured competition, Surrey’s traditional foes Middlesex have been placed in Group 7, and will play Buckinghamshire, Hertfordshire and Huntingdonshire.

Later in the summer however, Surrey will clash with Middlesex in the traditional London Cup and then play in the fifty over London Championship. Fixtures and venues for those games will be announced in due course.

Depending on availability at the time, the Surrey team for these matches could include England stars Sophia Dunkley and Bryony Smith and 2020’s break out all-rounder Alice Capsey as well as full-time professionals Aylish Cranstone and Danielle Gregory.

County women’s cricket is part of an overall domestic structure that also includes the T20 Charlotte Edwards Cup and fifty over Rachael Heyhoe-Flint Trophy – competitions played by the recently formed ECB Regional Centres of Excellence, including the South East Stars side that is run by Surrey and partially based at The Kia Oval.

The pyramid is topped by the Women’s Hundred, which was won this year by an Oval Invincibles side that featured Surrey players Alice Capsey, Eva Gray, Dani Gregory and Rihanna Southby – as well as former Surrey Stars players Dane van Niekerk, Marizanne Kapp, Grace Gibbs and Mady Villiers.