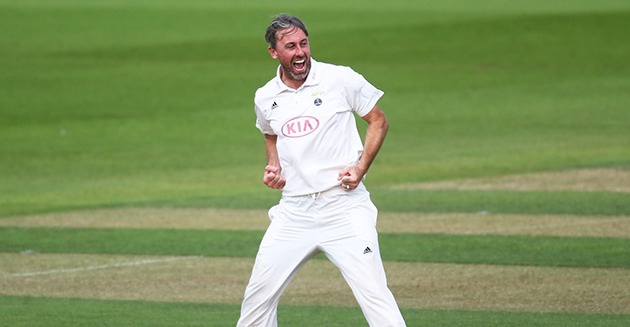 He’ll bring down the curtain on an auspicious career at the end of the season but Rikki Clarke will be able to look back on many wonderful moments in retirement.

Richard Spiller picks out five of them.

Rikki Clarke had marked his first-class debut with a century against Cambridge UCCE at Fenner’s in May. And he only had to wait until his third County Championship outing to pass three-figures.

Surrey made the most of an ideal pitch for batting at Taunton by amassing 608-6dec, Mark Ramprakash’s prolific summer seeing him stroke 218 and skipper Adam Hollioake returning to first-class action following the death of his brother Ben by cracking a typically rumbustious 87. Clarke took full advantage of tiring attack by making an unbeaten 153 from 180 balls, which Wisden reported “impressed the watching chairman of selectors, David Graveney”.

He finished unbeaten on 153, adding 210 with Ramprakash for the sixth wicket which contributed to a record aggregate for a Championship match of 1,815 runs, Surrey becoming champions.

Old Trafford was heaving for the first match of a NatWest Challenge series and there were three England debutants – Rikki Clarke, Anthony McGrath and Jim Troughton.

It was the former who made history by becoming the first Englishman to take a wicket with his first ball in ODIs, Imran Nazir pulling a long hop – this was before they were known as ‘slow bouncers’ – for Vikram Solanki to take the catch.

That was some recompense for a second-ball duck, bowled by Shoaib Malik, as Pakistan won by two wickets.

Few teams got the better of Gloucestershire in one-day cricket around the turn of the 21st century but Surrey were one and this 66-run triumph was key to claiming the National League title, four points proving the difference between the sides.

But it was in the field that he shone most, adding to his 3-48 by producing two direct hits among a total of five run outs for the hosts to delight a large crowd watching the day-night match as Gloucestershire were bowled out for 231.

It might not have been a matchwinning effort but Rikki Clarke’s third century of the 2012 County Championship campaign contributed to their successful pursuit of the title. Having arrived at Edgbaston in 2008 after a short spell at Derbyshire, he had established himself as a key contributor in Ashley Giles’s side.

Clarke’s run-a-ball 110no out of 400-8dec ensured they took maximum batting points in a rain-wrecked draw against Sussex maintained the momentum towards finishing top by 24 points, his 760 runs at 44 leaving him third in his adopted county’s batting averages, allied to 20 wickets and 29 catches settling in those giant mitts.

It was only fitting that Rikki Clarke and Morne Morkel should guide Surrey over the line to their first County Championship title in 16 years. The giant South African had added bite to the attack it had lacked previously – and has done since – and had the honour of hitting the winning runs as Surrey successfully overhauled a target of 272 by three wickets. His partner had returned to home turf from Warwickshire midway through the previous season and was revelling in the rich autumn of his career.